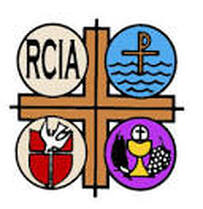 Download File
Becoming Catholic (RCIA)​​​​The Rite of Christian Initiation of Adults (RCIA) is the way adults come to learn about and experience the Christian life, specifically our Roman Catholic tradition, and become initiated into the life of our Church through the celebration of the Sacraments of Initiation: Baptism, Confirmation and Eucharist.
The RCIA is not something new. It is a return to the earliest traditions of our Church which took place between the second and the fifth centuries of the Christian era! The RCIA takes place step by step in the midst of the Christian community. The whole community is called to reflect upon the value of their faith, to renew their own conversion, and by their example, to lead those who are searching to be open to the presence of the Spirit in their lives.
​
The RCIA begins with a period of inquiry and maturing. This is a time for hearing the first preaching of the Gospel and of prayer. The end of this period is marked by the first stage or step which is celebrated by the whole community: The Rite of Becoming A Catechumen.
The second period is called the Catechumenate. This is a time of more intense preaching and teaching of the Gospel, prayer, spiritual direction, catechesis - the handing on the specific Roman Catholic traditions and personal contact with members of the larger Christian community. This period ends with "The Rite of Election" when the catechumens are ready to respond totally to God's call of faith through the sacraments of initiation, Baptism, Confirmation and Eucharist.
The third period takes place during Lent. It is a time of purification and enlightenment or illumination for a more profound spiritual preparation. Its focus and conclusion is the Easter Vigil celebration and the sacraments of initiation.
The final period takes place during the Easter Season. The newly baptized are able to deepen their experience of the sacraments and of being new members of the Christian community.

FORMED on Demand is the revolutionary digital platform that gives you unprecedented access to video-based study programs, feature films, audio presentations, and eBooks from the Church’s foremost presenters.

To register please enter www.stambroseparish.formed.org.
Do not sign up as individual.
​

PANCAKE TUESDAY
A Big thank you to Patti, Gemma, Theresa, Marge and also to Sara from Parent Council and other mothers for a successful pancake Tuesday!
We made about 1200 pancakes for the children at St. Ambrose Catholic School.

Anyone wishing to volunteer in any ministry here at St. Ambrose, please see Archdiocese Volunteer Screening website where you will find a list of volunteer positions and description.  Click here for a list of ministries https://www.archtoronto.org/volunteer-screening/Pages/Ministry-Positions-in-English-.aspx
Through the Sacrament of Baptism, we are called to share our gifts with others and with the world. Given the importance of this call from God, it is essential that we, as a community, do everything in our power to ensure that the offerings are shared fairly, at the right time and by the right people. We fulfill our mission more effectively when we do our utmost to ensure a richer, stronger more vibrant community of faith. Please see Father Donatello if you are interested in volunteering.

Matthew 25: 35 I was hungry and you gave me food, I was thirsty and you gave me drink, I was a stranger and you welcomed me.
Welcome to your home at St. Ambrose Parish! It is through the love of Christ that he has brought me here to St. Ambrose Parish to serve you as Pastor. It is my prayer and hope, and with the grace of God, we can build up the kingdom of our Lord with love and joy. We all have troubles and difficulties in our lives. But when we come to the Lord with a humble heart in the midst of our brothers and sisters in Christ we should all feel the warmth and mercy of God. We should encounter Jesus! Let us together welcome the hungry, the thirsty and the stranger who come to St. Ambrose Parish. Let Christ work through us to be the food of good works, the drink of mercy and the welcome that a stranger yearns for.    - Father Donatello Iocco

Aurelius Ambrosius, better known in English as Saint Ambrose (c. 340 – 4 April 397), was an archbishop of Milan who became one of the most influential ecclesiastical figures of the 4th century. He was consular prefect of Liguria and Emilia, headquartered in Milan, before being made bishop of Milan by popular acclamation in 374. Ambrose was a staunch opponent of Arianism, and has been accused of fostering persecutions both of them and of Jews and pagans.

Traditionally, Ambrose is credited with promoting "antiphonal chant", a style of chanting in which one side of the choir responds alternately to the other, as well as with composing Veni redemptor gentium, a Christmas hymn.

Ambrose was one of the four original doctors of the Church, and is the patron saint of Milan. He is notable for his influence on St. Augustine. Ambrose was born into a Roman Christian family about 340 AD and was raised in Trier.[2] His father was Aurelius Ambrosius,  the praetorian prefect of Gaul his mother was a woman of intellect and piety. Ambrose's siblings, Satyrus (who is the subject of Ambrose's De excessu fratris Satyri) and Marcellina, are also venerated as saints. There is a legend that as an infant, a swarm of bees settled on his face while he lay in his cradle, leaving behind a drop of honey. His father considered this a sign of his future eloquence and honeyed tongue. For this reason, bees and beehives often appear in the saint's symbology.

After the early death of his father, Ambrose followed his father's career. He was educated in Rome, studying literature, law, and rhetoric.[6] Praetorian prefect Probus first gave him a place in the council and then in about 372 made him consular prefect or "Governor" of Liguria and Emilia, with headquarters at Milan, which was then (beside Rome) the second capital in Italy.

Ambrose was the Governor of Aemilia-Liguria in northern Italy until 374 when he became the Bishop of Milan. He was a very popular political figure, and since he was the Governor in the effective capital in the Roman West, he was a recognizable figure in the court of the Emperor Valentinian I. Ambrose never married.

Soon after acquiring the undisputed possession of the Roman empire, Theodosius died at Milan in 395, and two years later (April 4, 397) Ambrose also died. He was succeeded as bishop of Milan by Simplician. Ambrose's body may still be viewed in the church of S. Ambrogio in Milan, where it has been continuously venerated — along with the bodies identified in his time as being those of Sts. Gervase and Protase.

Many circumstances in the history of Ambrose are characteristic of the general spirit of the times. The chief causes of his victory over his opponents were his great popularity and the reverence paid to the episcopal character at that period. But it must also be noted that he used several indirect means to obtain and support his authority with the people.

He was generous to the ﻿poor;﻿ it was his custom to comment severely in his preaching on the public characters of his times; and he introduced popular reforms in the order and manner of public worship. It is alleged, too, that at a time when the influence of Ambrose required vigorous support, he was admonished in a dream to search for, and found under the pavement of the church, the remains of two martyrs, Gervasius and Protasius. The saints, although they would have had to have been hundreds of years old, looked as if they had just died. The applause of the people was mingled with the derision of the court party.